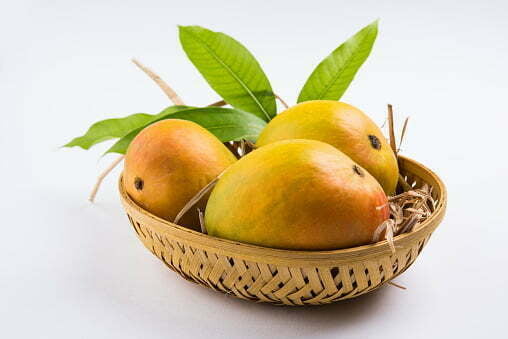 Nothing beats the summer season when it comes to delicious mouth-watering mangoes (Alphonso Mango). It has always been a pleasant and basic part of Indian lives. Our country is exclusively famous for its exotic mango hotspots, promising delightful flavours, and aromas there are 24 Varieties Of Mangoes found across the country. Mango-lovers are always eager to explore and enjoy exquisite varieties of the king of fruit. So why wait?

Available during mid-July, Alphonso Mangoes are internationally loved for their sunshine yellow appearance and delightful taste. Named after Afonso de Albuquerque, this voluptuous king of the mangoes is one of the most consumed varieties of mangoes in India among mango lovers. Ratnagiri and its neighbouring regions in Maharashtra are known to be one of the finest and exclusive hotspots for mango-lovers, widely famous for their Alphonso mangoes. Buy Fresh Farm to Home Alphonso on www.ratnagirihapus.store

Kesar mangoes owe their name to their saffron appearance and heavenly taste. This variety, highly renowned for their distinct sweet flavour, is considered to be the ‘Queen of Mangoes’. Girnar Hills of Junagadh, Gujarat are famous for their Kesar mangoes. Situated at 320 km from Ahmedabad, these hills are accessible by road and rail network. Available from May to July, Kesar mangoes are sought after as an ingredient for exotic dishes

The land of Nawabs is equally famous for its royal mangoes. Lucknow, along with its adjoining towns, is widely known for its mango belt of North India. Available from mid-May to late August, Dashehari mangoes grown here are easily distinguishable from other varieties of mangoes in India by their green peels and wholesome taste.

One of the Nawabi cities of West Bengal, the city of Murshidabad, is famous for its vast variety of delicious mangoes. Around 230 km from Kolkata, this city is easily accessible by roadways as well as railways. Well known for types like Kishan Bhog, Himsagar, Nawabpasand and Begumpasand, Murshidabad is an important producer and exporter region of India. Himsagar mangoes are found from May to Early June.

Hardoi along with its adjacent regions in Uttar Pradesh is another hotspot for mango-lovers. Around 112 km from Lucknow and accessible by road network, Hardoi is famous for Chausa variety of mangoes. Available in the months of July and August, these mangoes fall under the ‘sucking’ category and are exclusively famous for their yellowish colour and aroma.

The northern part of Karnataka is famous for its Badami variety of mangoes. Their delicious taste can be stated from the fact that Badami is also called the Karnataka-Alphonso in the neighbouring areas. They are usually available from May to July.

Safeda or Banganpali or Benishan Mango is a popular fruit in several regions in Andhra Pradesh; especially in Banganpalle town, which is evident from its name. Often called as ‘The King of Mangoes in South India’, this fruit is significantly larger than other varieties of mangoes commonly sold mid-season in the market and on average weighs about 350 – 400 grams. Exhibiting meaty texture, the thin and firm skin of this mango is sweet in taste and lacks fibre. Moreover, Safeda Mango is known to be rich in Vitamin A and C so it is good for health.

Sadda Punjab is another hotspot for mango-lovers, famous for its Bombay Green Mangoes. These medium-sized green mangoes, available from May to July, never fail to attract their lovers from distant places

Famous for its Langra variety of mangoes, Varanasi is a renowned hotspot for mango-lovers in India. Natives narrate the tale of a farmer who cultivated this variety of mangoes. Banarasi Langra mangoes, available in June-July are known for their lemon-yellow skin tone and equally delicious taste.

The electronic city of India, Bangalore, is famous for its Totapuri mangoes, also known as Bangalora or Sandersha mangoes. The city’s medium-sized greenish-yellow mangoes are a mango-lovers delight! Available from May to July, Totapuri is also one of the significant varieties of mangoes in our country with a distinct taste and aroma!

Although grown in almost all parts of India, the tastiest and distinct variety of Neelam mangoes comes from the state of Andhra Pradesh during May and July. Compared to other mangoes, Neelam Mangoes have a specific sweet smell and are usually smaller with the mangoes being a bit on the orange side of colour

Predominantly cultivated in the southern state of Karnataka across Bangalore, Kolar, Ramanagara and more during May and June, Raspuri Mangoes are an extremely popular variety of mangoes. Distinguished by its oval shape and its skin which is almost inedible, the Raspuri Mango can beat any other mango in terms of taste and juice per fruit if cultivated and harvested at the right time.

FUN FACT: Srinivaspur in Kolar is nicknamed as the Mango City of India as over 63 species of mangoes are found here. It is also the biggest producer of mangoes in Karnataka.

Malgoa or Mulgoba mangoes are known for their almost round shape and surprisingly thick skin. Mostly grown around parts of Tamil Nadu especially Salem, in its peak season of July and August, the Malgoa mango is big and rich in pulp and juice. It is generally considered to be one of the best mango varieties in the world.

Exclusively grown in the Malda district of West Bengal, Lakshmanbhog mangoes are usually available in the months of June and July. With a gleaming golden reddish skin and the right amount of sweetness, these mangoes were individually chosen by the West Bengal government to be exported to the United States.

Amrapali Mangoes – All Over India

Amrapali Mangoes are a hybrid variety created in 1971. A cross breed between Dasheri and Neelam Mangoes, Amrapali is grown on farms and orchards across India and is known for its deep red flesh once fully ripe but has a relatively short shelf life compared to other commercial varieties of mangoes.

Known for being relatively larger than the other mangoes with lots of pulp, the right amount of sweetness and each of them going up more than a kilo, Fazli Mangoes are mostly grown in the city of Malda in West Bengal.

The most popular among mango varieties in Goa, Mankurad is a mid-season fruit with very less fibre, naturally perfectly sweetened and known among Mango connoisseurs to be better than the all-famous Alphonso Mangoes. Usually, these mangoes are available in the local markets as early as April.

Endorsed by local shopkeepers in Gujarat as pure honey, Pairi Mangoes are usually available early in the mango season during April and July. Although not as sweet as honey, a bite of this mango is very distinct with its noticeable sourness and sweetness altogether

Mallika Mangoes – All Over India

Known for its exceptional sweetness with tinges of honey, citrus and melon, Mallika Mangoes are a hybrid of Neelam and Dasheri mangoes. Usually available in the markets relatively later than other mangoes during June and July, these mangoes are high-quality fiberless orange-ish coloured fruit.

As the name implies, Gulab Khaas Mango is a delectable fruit that exhibits rosy flavour and tastes that mango lovers are bound to love. This fruit has a blushing pink or red skin and it is often used to prepare mango-based desserts given it has a non-fibrous pulp. Available between May and June, Gulab Khaas mangoes are relatively small in size and are sold in abundance in states such as Bihar, West Bengal, and Jharkhand.

Vanraj Mangoes constitute a rare variety of mangoes that are sold in Gujarat; especially in Vadodara city. Due to high demand, the prices of this fruit are generally a bit higher than average. Vanraj Mango is typically oval in shape resembling the figure of an egg but slightly larger than it. With its skin sporting a reddish tint on the upper side, it almost appears as if the rare fruit is blushing. Also, since it is among the mid-season variety of mangoes, Vanraj mangoes have excellent keeping quality which contributes to the high number of people that are fans of it.

Kilichundan Mangoes are relatively large in size and are sold in large quantities in various regions of Kerala. The name of this fruit has derived from the fact that its end resembles the beak of a bird and this is exactly what Kilichundan means in the Malayalam language. One will find that its tropical tree is medium in size and bears a lot of greenish-yellow mangoes. Furthermore, this fruit is used in a lot of households and restaurants in order to prepare delicious curries and pickles.

Sold in abundance in Tamil Nadu and a few other regions in Chennai, Rumani Mangoes sport greenish-yellow skin that offers splendid flavour and juicy texture. This fruit is extremely rich in carotenoids which is a predecessor of Vitamin A and Vitamin E and hence is good for one’s health. Also, apart from devouring this yummy fruit in raw form, people now also consume Rumani Mangoes in the form of smoothies, jellies, ice creams, jams, and yoghurts.

These are just some of the varieties of mangoes in India. There is a reason India considers mango as the national fruit. Being a tropical paradise, India has the best weather for growing mangoes. As a result, newer varieties are always being created and found. According to the National Horticulture Board, there are about 1500 varieties of mangoes across the sub-continent. So, get travelling across India and find these delicious rich varieties of mangoes and more!

Blog categories
Recent posts
Recent Comments
We use cookies on our website to give you the most relevant experience by remembering your preferences and repeat visits. By clicking “Accept”, you consent to the use of ALL the cookies.
Do not sell my personal information.
Cookie SettingsAccept
Manage consent

This website uses cookies to improve your experience while you navigate through the website. Out of these, the cookies that are categorized as necessary are stored on your browser as they are essential for the working of basic functionalities of the website. We also use third-party cookies that help us analyze and understand how you use this website. These cookies will be stored in your browser only with your consent. You also have the option to opt-out of these cookies. But opting out of some of these cookies may affect your browsing experience.
Necessary Always Enabled
Necessary cookies are absolutely essential for the website to function properly. These cookies ensure basic functionalities and security features of the website, anonymously.
Functional
Functional cookies help to perform certain functionalities like sharing the content of the website on social media platforms, collect feedbacks, and other third-party features.
Performance
Performance cookies are used to understand and analyze the key performance indexes of the website which helps in delivering a better user experience for the visitors.
Analytics
Analytical cookies are used to understand how visitors interact with the website. These cookies help provide information on metrics the number of visitors, bounce rate, traffic source, etc.
Advertisement
Advertisement cookies are used to provide visitors with relevant ads and marketing campaigns. These cookies track visitors across websites and collect information to provide customized ads.
Others
Other uncategorized cookies are those that are being analyzed and have not been classified into a category as yet.
SAVE & ACCEPT